The screened porch is a popular place for our guest to relax, but the screens themselves had seen better days. Over the summer the screen became ripped in several places. It was time to fix this. 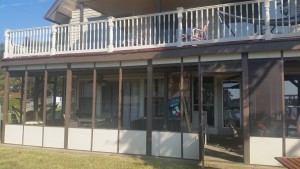 After the old screen is removed.

So last weekend we removed out all the old screen and replaced it with brand new solar screen that is stronger than the old one was. The new one should stand up to the accidental assault of dogs and kids.  It also blocks the sun, keeping the screened patio cooler in the heat of the summer.

With the new screens.

The new screen also gives us a nice place to relax without flies and mosquitoes buzzing around.

Speaking of bugs, there is a bug light attached to the garage that will help keep bugs away from the deck and garden area. If you hear a crackling noise near the garage, that was a bug being zapped.

Posted in: The House, Updates